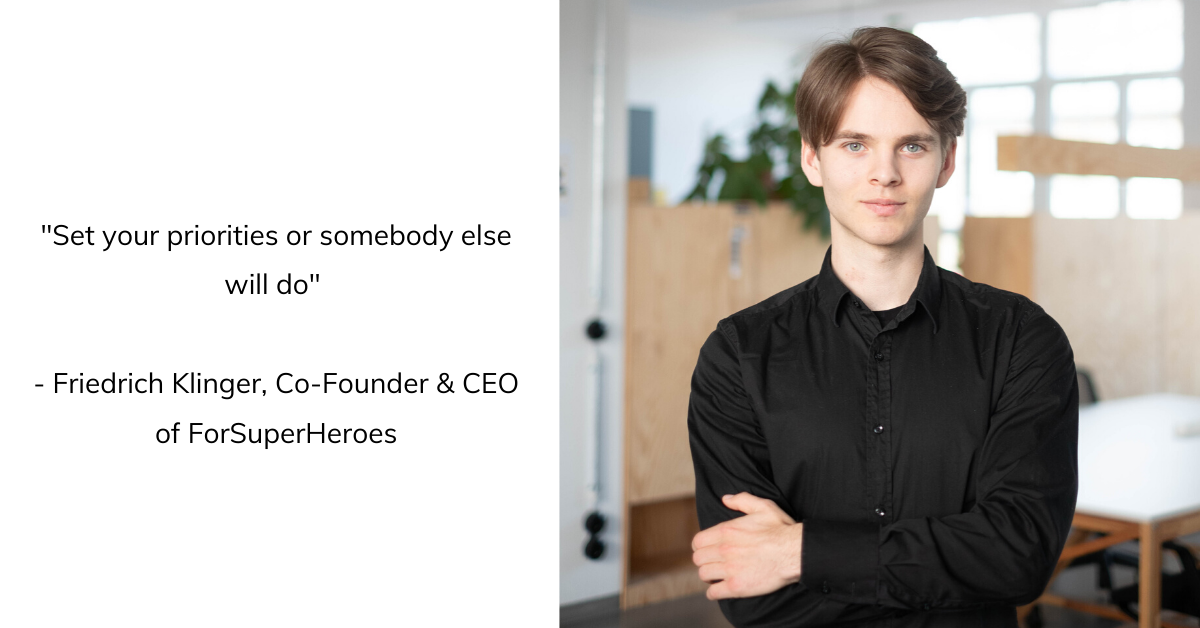 “We can achieve more together”, says Livia Zimermann, Co-Founder and CEO of Zero Waste Era. In an interview she explains why she decided to join the startup acceleration program High-Tech SeedLab and shares her biggest learnings from the past. She was the first founder to be interviewed for the blog-series ‘Lessons Learned of Startup Founders’.

The series also features Mitul Jain, Co-Founder and CEO of Leaf. Similar to Livia, Mitul appreciates the community aspect of the High-Tech SeedLab: “We are a small batch so people are ready to provide feedback and are easy to access”.

Next one up in this series is Friedrich Klinger, Co-Founder and CEO of ForSuperHeroes. Enjoy the read and feel free to check out the rest of this blog-series. Our founders not only share practical learnings but also tips on how to deal with the emotional difficulties of being a founder.

Friedrich, what’s your background and what are you working on at the moment?

“I actually studied entrepreneurship but did a pivot during my studies. Half way through I got bored of all the business topics and so I started to take courses on neurology and learned how to code. Then I got a special permission to write my thesis on a neuro-tech device. In my thesis I basically developed a device to detect concussions in athletes.

Currently we are working on ForSuperHeroes. Our goal is to create the healthiest meals possible. We take all those healthy foods like berries, nuts, and vegetables and put them into easy to consume meals. We freeze-dry them to make one meal powder without adding anything artificial or highly processed to that. Our long-term vision is medical food, that means that food can be prescribed to prevent disease and it can be personalized to certain health-conditions of individual people.“

According to my research you and your Co-Founders of ForSuperHeroes previously founded another startup called Oaksports. What was that about?

“Well, Oaksports originated from the device I developed in my thesis. We developed mobile EEG (Electroencephalographic) technology and started to apply it to detect concussions in contact sports for athletes. Due to some patent issues we later switched to mobile-neurofeedback therapy, that means feedback based on actual brain activity.

To be honest, that wasn’t even my first company (laughs). I have basically been starting companies since I was 17. Some of them still work, but most of them don’t. “

What are your three biggest learnings from your first founding experiences?

“With Oaksports we had a bit of a hard time because it wasn’t a classical startup. Since we offered a med-tech device we went into a highly regulated market, so we had the hurdles of hardware and the hurdle of getting the medical device certification. That hindered us from entering the market for two or three years at least. On top of that, a lot of capital was required to do that.

What we learned is to talk to customers early in the process, which sounds obvious but was extremely helpful. We talked to a lot of people who had problems with frequent concussions and even had a talk with the NFL (National Football League) at one point since they literally had a concussion committee in their team.

Another recommendation that I’ve been thinking about  a lot is that many people suggest startups to fail fast and fail often. But to be honest I think failing is not good (laughs) and we should still see it as what it is. So, founders should try to avoid failure in my opinion. They should really try to win and not to fail. I think that’s an important mentality.”

Interesting, this is actually the first time I’m hearing this. The two founders I interviewed before you agreed with the statement “Fail fast and fail often”.

“Yes, because everybody tells you to do so. But that’s true only to a certain extent. It’s right that you should do experiments and see what works. But at the same time don’t go in with a mindset of failure which I think a lot of people do. I myself have been doing that. But at the end you don’t want to fail. You want to win with your company, so you’ve gotta keep that positive mindset.

I think my third learning is a more personal one. That is: Really take care of your personal health. Stay productive but not in an obsessive way. Don’t put too much pressure on yourself. Take time to do sports and don’t feel bad while doing it. I think it’s very important that founders take time to do things that are healthy for their body and mind.”

What will you actually do differently this time with ForSuperHeroes?

“Right now we do a lot of things different: The company is KPI driven from day one, so we always have things we measure every week. For example, I have these weekly updates where we internally write down accomplishments and challenges to reflect on rigorously. This is something that grew out of frustration while building the med-tech company before. Because we were so far away from the market back then, now I want to have numbers to measure if we are on the right track. Also, this time we are working even more closely with customers from day one.

Another learning worth mentioning is to be brutally honest to yourself. Like really brutally honest reflecting on the things you learned because I think a lot of businesses fail because founders tell themselves the story they tell everybody else. They tell the story so often that they start believing it. They are not critically reviewing what they’re doing.”

Why did you decide to join the High-Tech SeedLab ? What are your expectations?

“To be honest we are positively surprised by the High-Tech SeedLab, because we didn’t expect so many useful things to  come out of it. The initial reason for us was to get funding. Though, what is really helping us right now beyond the money are the coachings. At the High-Tech SeedLab we have this one coach who really thinks deeply about our business and gives us very helpful input.

Also the exchange with the other startups is good, especially with the ones with similar challenges. For example, for us it’s really cool to have Zero Waste Era on board because they are also building a B2C brand. It’s interesting to see what challenges they face and share learnings.”

Being a founder can sometimes be overwhelming. What was a rather dark time for you as a founder?

“Puhh, so many (laughs). I often build my identity on the companies I build. Then having something fail makes me really struggle. For me it’s really helpful to have friends then to whom I can talk about this and realize that ‘I am not the company’.

Doing things that you stand for beyond your company can be very helpful to make this differentiation. I for example am really involved with the Kairos Society, a society for young tech entrepreneurs. I help organize things and engage with the community there. I don’t get paid for that, it’s just something I like to do.”

What would your ultimate motivation quote be for future entrepreneurs?

“Oh that’s a good one. Set your priorities or somebody else will do.”

What are your favorite entrepreneurial resources that you would recommend to early entrepreneurs?

“Definitely watching a series of the Y Combinator Startup School. I’d recommend watching all the lectures from one of their classes and then just start executing and don’t waste too much time on YouTube.

I’m also a big fan of ‘Zero to one’ from Peter Thiel. It has a VC bias but also some really good ideas. It was really mind-opening when I read it a few years back.”

Thanks for this interview Friedrich, it was a pleasure!

Are you also an experienced entrepreneur who wants to share her/his experience? Then contact [email protected]. The High-Tech SeedLab team and batch 2020 is always looking for entrepreneurs to exchange ideas and learn from another.

This program is financed by the European Social Fund (ESF), as well as the State of Berlin.
Category: StoriesBy Asia Martin Lopez from the High-Tech SeedLabMay 15, 2020
Tags: accelerator programForSuperHeroesstartups

An Interview with our Marketing Manager Jochen Schwab
July 16, 2021

Reflection: How to manage the first talent at your early-stage startup
July 2, 2021

An interview with Fabio Volkmann, Co-Founder of the Climate Farmers Academy
June 25, 2021