As it happened: the AtomLeap High-Tech Accelerator Demo Day 2018 Last week, we celebrated the conclusion of the first year of the AtomLeap High-Tech Accelerator program by bringing together the nine startups with which we have worked over the past year and Berlin-based investors, policymakers, students, and entrepreneurs at our annual Demo Day. The evening featured a pitch competition, which was followed by networking and demonstrations of the products that the teams have developed during our program.

Attracting over 100 attendees, the event was graciously hosted by AtomLeap’s partners at the signals Open Studios, German insurer Signal Iduna’s collaboration, co-creation, and open innovation center. Below is a roundup of the evening. If you would like to learn more about the startups that we have accelerated — several of which are looking to raise seed funding in the coming months — feel free to get in touch with us at [email protected] Furthermore, if you are a high-tech startup based in Berlin and would like to join our program (and participate in our 2019 Demo Day), get in touch using the contact form on our homepage! 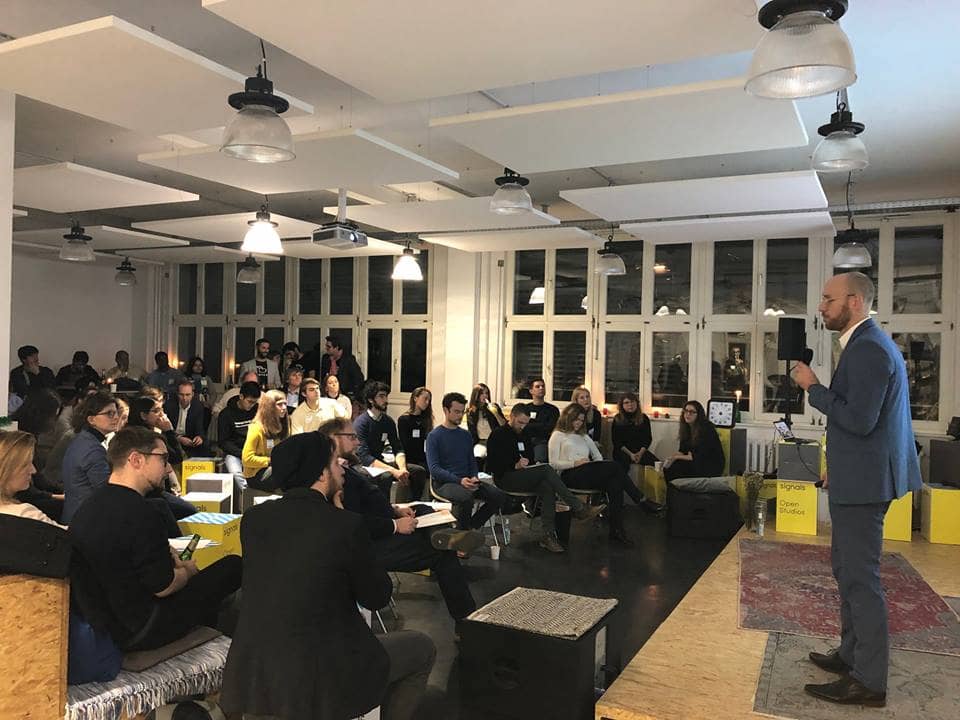 Konstanze Neumann, AtomLeap’s co-founder and project director, kicked off the ceremony and warmly welcomed the audience during her opening speech. Subsequently, Raphael Kube, who oversees the ICT, media, and creative industries cluster at the Berlin Investment Bank (IBB), took the floor to present the financing mechanisms that the institution makes available to entrepreneurs. Kirsten Winterfeld, the AtomLeap High-Tech Accelerator’s project coordinator, then initiated the pitch competition by inviting the first team to take the stage.

Photo 2: Moritz of Humphry Marine presenting the fuel-cell based propulsion system for boats.

Moritz Weißenborn, the CEO and co-founder of Humphry Marine, was the first to pitch the technology that his startup has devised to make boats more sustainable. Instead of running on diesel, the propulsion system that this team of innovators has devised runs on hydrogen and emits no CO2. Over the past year, the team has developed and launched its first prototype, which it is currently being tested with pilot customers from the boating industry.

Photo 3: Isabella Hillmer from Ghost – feel it. about the alternative her team developed to help patients regain feeling in their hands.

Meanwhile, Isabella Hillmer from team Ghost-feel it. spoke about the leaps and bounds that the smart wearable startup has made over the past year. The team is currently awaiting the patent for its technology, which enables people that have lost sensory feeling in their hands to gain it back. Furthermore, Ghost will start a pilot project with the largest healthcare center in Germany — the Charité — in 2019.

Photo 4: Christian Lang of Chargery present the mobile charging solutions he and his team have developed.

Christian Lang, the co-founder and CEO of Chargery, presented the solution that his team devised to tackle the limitations intrinsic to electric vehicles. Namely, Chargery offers mobile charging solutions, as well as a host of other vehicle maintenance services, to owners of electric vehicles and electric fleets. In so doing, the team helps to address the short range per charge associated with electric batteries.

Simon Hossell, the CEO and co-founder of |pipe|, introduced the audience to the startup’s solution to secure the connection between smart devices. His team has been working on a direct connection between smartphones and smart objects that does not go through the cloud, and is therefore impregnable to potential hackers and data breaches.

Sven Przywarra, the co-founder and CEO of LiveEO, presented his team’s efforts to predict infrastructure failures using Earth Observation (EO) imagery. Having already secured contracts with Deutsche Bahn, one of Europe’s largest railway operators, the team is preparing to expand the use cases for its solution to other sectors.

Magni Johannsson, co-founder and operations director at Disrupt Space, explained why a platform is needed in order to bring together all the emerging space ventures. The startup has been working on creating a space community by organizing conferences in different locations throughout the globe. As a next step, the team aims to create an online blockchain-based platform to facilitate the cooperation, investment, and partnerships among and in space startups.

Photo 9: Team AIRTEAM about the use of aerial imagery to map and monitor urban infrastructure.

Cecilia Caire, operations manager at AIRTEAM, presented the startup’s aim of facilitating the mapping of urban infrastructure using aerial imagery from drones and satellite data. In so doing, AIRTEAM wants to make the job of roofers and other professionals easier, faster, and safer. Looking ahead, the startup intends to expand its scope from mapping rooftops to monitoring and mapping larger structures.

Photo 10: Adam Rumjahn of Orion introduces to the audience to the benefits of using 3D printing in industrial manufacturing.

Adam Rumjahn, the Managing Director and co-founder of Orion (formerly known as Innovo), introduced the audience to the industrial uses of 3D printing (or additive manufacturing) that his company is making possible. By making 3D printed parts more robust, Adam and his team want to see the technology used on a wider scale in industrial manufacturing — even in the manufacturing of aircraft and spaceship parts.

We at the AtomLeap High-Tech Accelerator were impressed not only by the compelling and energetic pitches, but also by the sheer progress that all the teams had made in such a short period of time. For this reason, the jury, which was comprised of investors and analysts from different institutions in Berlin, had a very hard time picking a winner. After intense deliberations, they decided to award the top prize to LiveEO, which the jury members deemed to have the most convincing business model and promising prospects. Furthermore, Cecilia from AIRTEAM won the special prize for the best pitch of the evening.

According to jury member Inga Schloms of Davidson Technology Growth Debt, the AtomLeap High-Tech Accelerator Demo Day was a great opportunity to “get a good overview if what the trends are in high tech and to get to learn about new startups.” Furthermore, Raphael Kube, who was also on the jury, said that “he really like the quality of the startups and of the audience. There are a lot of interesting people here tonight and the pitches were all enthusiastic and convincing.”

Simon and Adam from |pipe| and Motor Ai respectively concurred in that being able to pitch in three minutes — and the workshops that AtomLeap organized for this purpose — is a great skill to have as it conveys discipline. Besides, said Simon, “There were nine amazing startups here tonight. Some of them I know, some of them I didn’t know before. The ones I know seem to have made a tremendous amount of progress.”

Thank you to all the teams, jury, host, and the audience for joining us for this annual celebration of innovation and of the inspirational participants in our program in particular. We look forward to welcoming you all to next year’s Demo Day!

This program is financed by the European Social Fund (ESF), as well as the State of Berlin.
Category: StoriesBy The High-Tech SeedLab TeamDecember 17, 2018