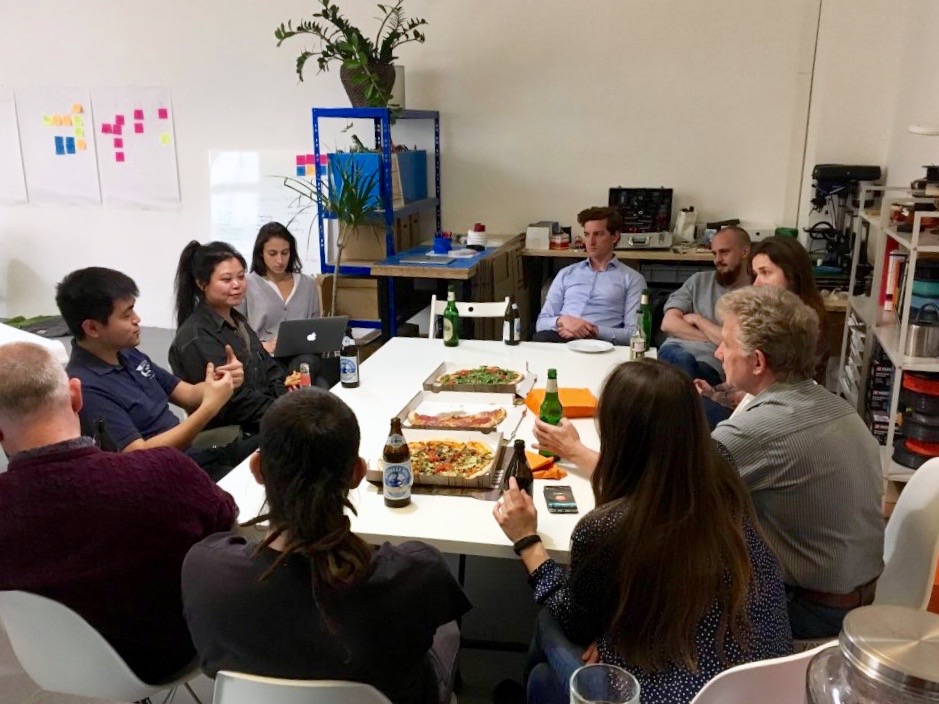 It seems like only yesterday we started the AtomLeap High-Tech Accelerator. But time flies when you’re having fun and, before we knew it, we reached the end of our first round. To celebrate the participating startups and their accomplishments over the course of the last half a year, we invited them all to join us for beer and pizza at our office in Kreuzberg this week.

In a light-hearted, but productive session, the teams had the chance to interact with one another for one last time as part of the program; to meet one of the startups that will join us in May — Humphry Marine, which provides solutions for clean maritime propulsion; and to share with the others their goals and the progress they have made during the last six months.

Looking back upon LiveEO’s time in the accelerator program, data scientist Imanol Uriarte Latorre said that he was quite proud of how far the company has come. “Our most important piece of news is that we’ve recently won the European Commission’s Copernicus incubator funding of €50,000,” he said, noting that the company had previously won the Copernicus Masters BMVI Earth Observation Challenge for Digital Transport Application in 2017 and had been enroled in the Copernicus accelerator program since November. Not only that, but LiveEO is also working on a proof of concept as part of the Deutsche Bahn Mindbox accelerator, after having completed a similar project with software multinational SAP.

As we mentioned in our introduction to LiveEO, the team has devised the first private real-time Earth Observation (EO) application, which can be used for the monitoring of infrastructure and various commercial premises, amongst others. “Overall, we’re doing well,” Imanol confessed. “We’ve expanded our team by hiring a remote sensing expert and a software developer in the last two months. We are working closely with Deutsche Bahn, have secured a second client in Germany, and are beginning to look for clients in foreign markets,” he added.

Meanwhile, the Disrupt Space team, the second startup in our accelerator, was very happy to announce that they would hold their annual stakeholder summit in Ibiza in early July this year. “Ibiza will be a teaser for us, as we intend to launch our platform afterwards,” Magni Johansson, one of the company’s co-founders, said. Taking advantage of the increased democratization of the space industry, the company has been developing a platform that brings together entrepreneurs, investors, and decision makers in order to collaboratively build sustainable models for space ventures.

Being in the AtomLeap High-Tech Accelerator was useful for Disrupt Space, according to program manager Ke Wang. “The weekly check-ins with the AtomLeap team were useful because they helped us focus our activities to reach the goals we set during the meetings,” she said.

Not only that, but the company has come a long way since joining the accelerator six months ago, according to Magni. Thus, after defining Disrupt Space’s strategy in a white paper in November, the company proceeded to consult with stakeholders in different countries, including China, about how to improve their prototype and to prepare their marketing strategy. A recent development is that, in April, Disrupt Space incorporated a payment system in their platform, enabling the startup to charge customers for their service. Looking ahead, Magni anticipates that the road to progress will be bumpy, but that this is normal when building a meaningful service. “It’s easy to build a company, but difficult to build something impactful. Entrepreneurship is not only about succeeding, but about failing time and again, until you succeed. It’s about the journey,” he said.

The last sixth months have also marked transition period for |pipe|, which is a startup that is building a secure, low latency side channel or transport layer connecting IoT devices directly to their owners’ smartphone browsers without passing via a cloud-based intermediary server.

Since joining the AtomLeap High-Tech Accelerator last November, the two-member  team has been hard at work improving its pitch deck, meeting and attracting investors by participating in industry conferences, and establishing its pricing model. Furthermore, according to co-founder Tim Panton, external developments in recent months like the Facebook-Cambridge Analytica scandal and the legislative changes surrounding data privacy in the European Union have convinced people that centralized data collection and management has seizable downsides. These events have made the work of providers of decentralized services like |pipe| all the more important and timely, according to Tim.

If you’ve been following our blog, you know that we have two other startups in our accelerator at the moment – Ghost and Chargery, which are building a prosthetic glove and mobile solutions for the charging of electric vehicles, respectively. Neither team was able to attend the get-together, but we will keep in touch and let you know if they have news in the upcoming weeks and months. Chargery joined us in January and will continue with us until the end of June, meaning that you’ll have the opportunity to hear more from them soon.

We are very happy to have had the opportunity to meet and work with such creative, resourceful, and perseverent entrepreneurs in the last half a year. We wish all the teams the best of luck going forward and we cannot wait to hear about the evolution of their startups in the months to come.