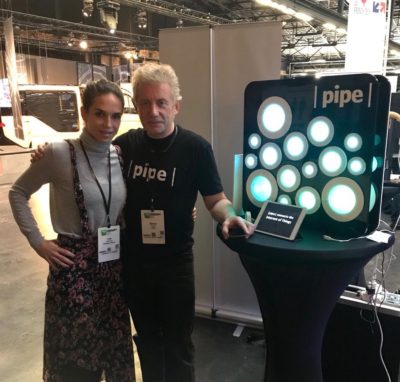 Entrepreneurs, investors, hackers and technology fans from all over the world gathered in Berlin on December 4th and 5th to discuss the latest trends and high-tech innovations at TechCrunch Disrupt Berlin, a technology-focused event series that takes place in London, San Francisco, New York, and, starting last year, in our beloved German capital.

TechCrunch is known as THE event for startups, because it helps expose them to potential supporters and financiers, to whom they have the opportunity to present their ideas and products. The conference consists of talks, panel discussions, the Startup Battlefield Competition, a 24-hour Hackathon and the Startup Alley.

One of the startups in the AtomLeap accelerator, |pipe|, participated in this year’s edition of TechCrunch Disrupt Berlin. |pipe| is a secure, low latency side channel (a transport layer) that connects IoT devices directly to the owner’s smartphone browser, without passing via a cloud-based intermediary server. The startup gave a live demo of their solution at the Startup Alley at Disrupt Berlin, alongside other early-stage companies from various fields. The Startup Alley was a great experience for co-founders Tim and Simon, as it allowed them to connect with other talents, potential supporters, investors and journalists.

According to Simon, “this event has been a great opportunity for us. There were so many creative minds at the conference! We had the opportunity to talk to other startups and learn about their products, but also with corporations like Samsung”.