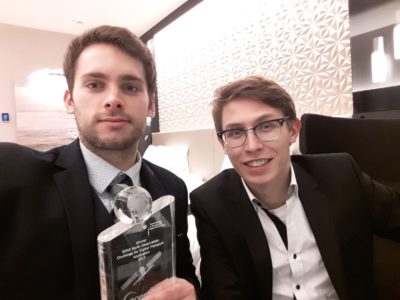 Last week, we introduced you to the first team in our accelerator program. This week, we would like to continue the introduction series with our second team, LiveEO.

Based in Berlin, LiveEO is the first private real-time Earth observation (EO) application. The company was founded by Daniel Seidel and Sven Przywarra  with the aim of providing intelligent monitoring solutions based on a combination of a variety of EO data sources.

The two co-founders first met at the INNOSpace conference Berlin in May 2016, where they exchanged thoughts about the space industry for the first time. They stayed in touch after the conference and officially started their journey together five months later, with a lot of beer and space talk in a bar in Berlin. They have been working together ever since and have made great progress.

Daniel serves as the company’s co-founder and CTO. He studied Mechanical Engineering and Aerospace Engineering at RWTH Aachen University, where he specialized in aerodynamics and orbit dynamics. Before founding LiveEO, he worked at BMW in Munich, where he gained experience in project management and developed a passion for transforming innovative ideas into prototypes. He has also worked as a freelancer in quantitative and qualitative research on the automotive industry for eight years. In addition to being a space enthusiast, Daniel is a major fan of Star Trek and a self-professed lover or taekwondo, football, and squash.

Sven, LiveEO’s other co-founder and CFO, has a background in Business Administration and Engineering, with a focus on space engineering. After his studies, he developed an expertise in the space sector while working as a public relations and business development representative for a Berlin-based company, Part-Time Scientist GmbH. In addition to LiveEO, he also founded NewSpaceVision, a new space event series in Europe, and established a network of people passionate about this field. In his free time, he is involved in political activism and likes to have friends over at his place.

We asked Sven and Daniel a few questions about themselves and LiveEO in order to introduce them to our readers. Find their answers below.

How would you describe your product/idea in one sentence?
LiveEO integrates autonomous unmanned aerial vehicle (UAV) constellations into satellite-based EO.

When did you start working on your idea?
We started exploring EO technologies at the end of 2016. In March 2017, we submitted our first proposal for a tourism application that used merged satellite data for an European Space Agency (ESA) tender. This is when we realized that we could solve bigger problems with our approach. LiveEO emerged from this idea and was born in May 2017, with an intended focus on the monitoring of big infrastructure networks.

How have things changed since then?
Everything happened extremely fast. We applied for the two biggest space competitions in Europe. We won one of them, the Copernicus Masters, and placed second in the European Satellite Navigation Competition, where our application scored best out of 487 projects regarding social and ecological impact. At the moment, we are part of the Copernicus and AtomLeap accelerators and have the opportunity to make our vision come true. Moreover, we have doubled our team’s size from three to six, and are in talks with big corporations like SAP.

What are your plans for the future?
In six months, we want to have our first container-as-a-service product, which will be used by corporations all over the world. We also want to organize a first round of fundraising, a Series A round, by that time.

Why did you choose to take part in the AtomLeap High-Tech Accelerator? What are your expectations from the program?
The program offers individual workshops tailored to our needs. In order for our tech vision to materialize, we need support with legal aspects, marketing, and patents, among others. The AtomLeap team is of great support in these areas, and can help us develop the company and overcome all the hurdles associated with launching a business. Besides, the financial support for four of our team members enables us to focus on work, without having to worry about your livelihood for the duration of the program.

Lastly, what do you like the most about the Berlin startup scene?
Diversity! We love it. Look at our team! We recently hired a Spanish developer, Imanol, and a Croatian developer, Lucija. If you want to build a complex software-based product, you will find the greatest talent in Berlin!