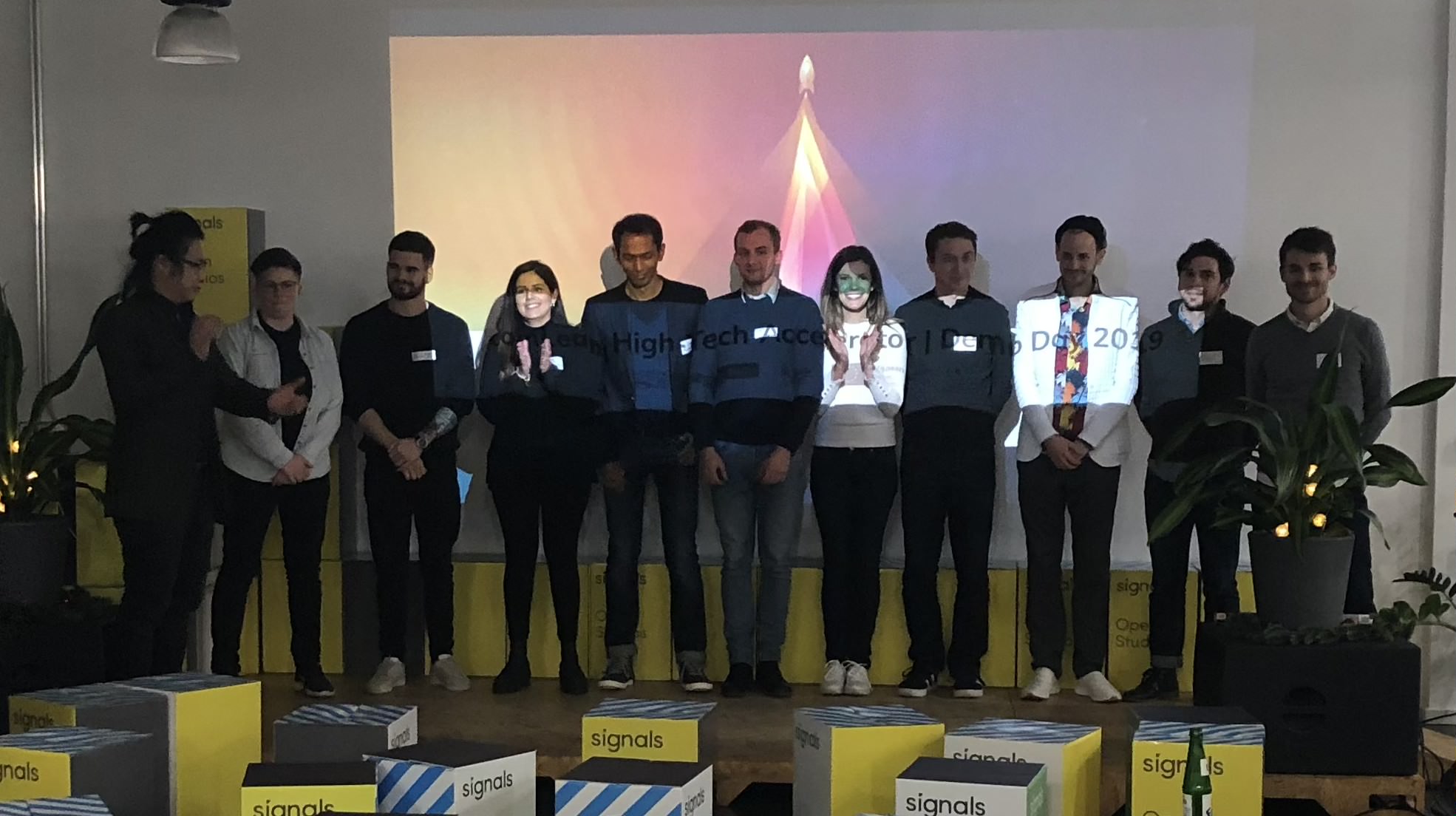 Earlier this week, we celebrated the official end of our 2019 accelerator round at our Demo Day, where we brought together the six teams that we’ve been working with over the past year for a pitch competition. In attendance was a crowd of investors, students, entrepreneurs, and tech insiders.

On the slightly rainy December evening, the Demo Day kicked off amidst the warmth of steaming Glühwein and Christmas lights at the signals Open Studios, the open innovation centre of German insurer Signal Iduna.

Jens Lapinski, CEO of Angel Invest and former managing director at Techstars Berlin, started the event with a speech on the non-traditional paths of startup founders. Instead of running through the template of going to top universities, a stint at some top consultancy or VC before breaking out to do their own gig — innovators can come from all sorts of different routes. Some do indeed hail from the template of top universities and organizations before founding their own business, but many ideas are also inspired by alternative journeys. In essence, CVs are no guarantee of creativity, and by no means a surefire metric of potential: in the volatility of business, and particularly in the world of startups, assessments on whether a founder or a team can execute can only be made individually, on a case by case basis.

Rene Haas, head of business development at CleanAI, was first to pitch. AI and computer vision are everywhere these days, except in the rapidly burgeoning industry of shared mobility. The hardware and machine vision algorithms developed by CleanAI are used to detect lost belongings and determine the cleanliness of car interiors, so fleet operators know when and what kind of cleaning needs to be done to their vehicles. In the future, this technology can also be applied to factories, hotels, and public transport. Over the past year, CleanAI has made huge progress in the sophistication of the detection algorithm — having secured not only a win at the Mercedes IAA Hackathon, but also a pre-seed investor for when they leave the AtomLeap program.

Next up was Pauline O’Callaghan, CEO of Hearable Labs (Formerly Hearability). Moved by the often-stigmatized use of hearing aids, Hearable Labs decided to create the technology for hearing enhancement devices that can be used by everyone — and not just the the hearing-impaired. The device, codeveloped with Fraunhofer IZM, allows users to gain high quality audio while also being able to exert control over what they hear from the environment around them. The hardware is complemented by an app, which identifies the types of surrounding sounds for the user to amplify or tune out, as well as letting the user ‘steer’ the audio towards a particular direction. The aim, ultimately, is create a kind of gorgeous looking ‘hearwear’ that can be worn by the able-hearing and the hearing-impaired alike.

Alina Bassi, CEO of Kleiderly, followed with her take on how to address two environmental problems with one solution. Namely, the waste of the plastic and fast fashion industries. The first problem is that for every kilogram of of plastic, 6 kilograms of CO2 is produced. The second problem is that a whopping 87% of all materials used for clothing end up in landfills or are incinerated, generating in the process as much CO2 emissions every year as six billion return flights from Berlin to Australia. To fix this, Kleiderly has invented a way to take waste clothing (say, your t-shirt and jeans) and turn them into a bioplastic (less polluting than traditional oil-based plastics), which can be moulded into different products like suitcases or headphones. This way, all the wasted garments could be transformed into different products for a second life.

Suvrajit Saha, CEO of Klimazone, opened the second half of the pitches with his idea on predictive production intelligence for the agriculture industry. Noticing that some 30-50% of post-harvest food goes to waste because of mismatches between food demand and supply, Klimazone has created a method to combine satellite imagery with market data to generate predictive intelligence that lets farmers know what they need to grow, in what quantities, and where to sell to. The idea is to put this intelligence on a dashboard so farmers could track prices, forecast supply and demand, and calculate the potential earnings to inform what kinds of agriculture they should be targeting.

Nina Patrick, CEO of MiProbes, then took to the stage to talk about their synthetic biology-based solution for food safety testing. Before food and beverages end up in the supermarket and your home, they are tested at different points for quality and safety assurance. But the kinds of testing used by food manufacturers use now are complicated, and can take up to 2-10 days to display results. With MiProbes’ testing kit, however, it takes less than 3 hours for results to show whether the tested product has been contaminated. For companies, this saves an immense amount of time and money because it lowers the risk of recalls, but also means they don’t have to store products for as long before shipping. Additionally, because the testing kit is so simple to use, it also has use cases in being used by consumers directly to detect spoilage organism and common food pathogens in their food.

Johannes Mutter, co-founder of Neu (formerly Augmented Thinking) came in on the tail end of the evening to present their AI-powered, innovation-enabling workspace. Thinking up a new idea is almost always a complicated process, and you end up with notes half-scrawled across a dozen books, inspiration boards, and on the back of napkins. Sometimes, it can take year and years before the right connection is made and the idea is born. Neu wants to accelerate and inspire that process with their digital workspace. The workspace is based on a database of exemplary projects, dissected by the type of technology, the problems they were seeking to solve, the strategies employed etc., so that a user can instantly look at a project, say, Zipline, and see it from a spectrum of different angles. The point being that if you have an inkling of something in mind, or a problem you want to solve, you can immediate browse through a recommended list of relevant ideas, and be able to combine them in a workspace to create something unique.

And that was it for the pitches. The teams all entered the program at the early stages of the venture-building process, but without exception made incredible progress in the short months of the accelerator. Little surprise that the jury, which was comprised of investors and analysts from different institutions in Berlin, had a very hard time picking a winner.

After much deliberation, however, MiProbes ended up with the winning prize, as they were deemed to have the most advanced product and convincing business case. A massive congratulations to the team, and a big thanks to Sparkasse for sponsoring the prize!

Also, a big thank you to all the teams, jury, host, and the audience for joining us for this annual celebration of innovation and our amazing founders for the 2019 program. Our next round, with a focus on innovations for sustainability and promoting women in tech, will begin in February 2020. Keep your eyes open for the next cohort of founders about to embark on the journey of innovation!

This program is financed by the European Social Fund (ESF), as well as the State of Berlin.
Category: StoriesBy The High-Tech SeedLab TeamDecember 19, 2019Leave a comment